skip to main | skip to sidebar

My childhood self would not know what to do if he saw this coming. Still not available in the US (or Canada) but you can get it already in Europe. The nice folks at the LEGO store say I should be able to pick one up late July or early August. Here it is in the Denmark LEGO store.  You can see my original concept art in this previous post. The troops are all Paul Adam and the Republic Fighter in the commercial below was designed by Diego Almazan.

Here's some official images of the set and a commercial: 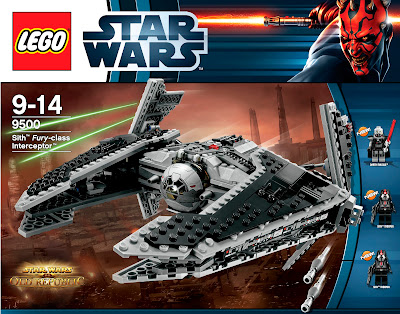 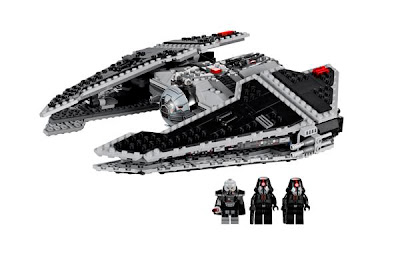 Posted by Ryan Dening at 9:01 PM No comments:

I am really excited about the launch of Mass Effect 3, everybody I know who's playing it loves it. I can't wait to jump in myself and continue the story. I did some fan art set in the Mass Effect universe, I had fun doing it so I thought I'd share. I imagine this guy stationed on a frontier outpost defending the earth from afar. 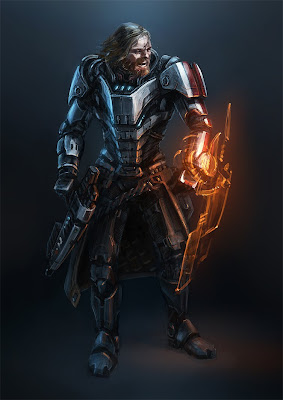 ps. I work at BioWare, but in Austin on Star Wars, I had no involvement in the development of Mass Effect - that's developed up north in my homeland. This is purely fan art done for fun on my own time.
Posted by Ryan Dening at 8:03 PM 3 comments:

In August, LEGO is releasing a ship that I designed for Star Wars: The Old Republic! This is more than my childhood could ever dream of. Here is a photo of the set on display at a recent toy fair: 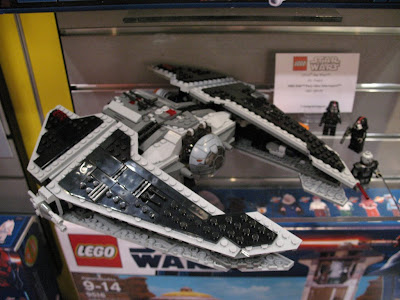 You can see more images and a video from fbtb.net here.
Here is the concept: 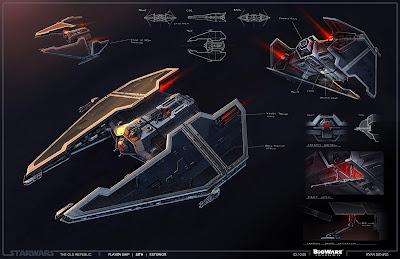 © 2011 Lucasfilm Entertainment Company Ltd. or Lucasfilm Ltd. All rights reserved.
Here is the first Space Lego ship I got as a kid: 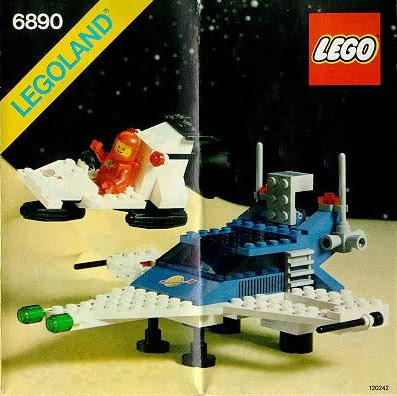 We've been pretty busy at BioWare making Star Wars™: The Old Republic™. Recently I had the opportunity to do a writeup with Christopher Reeves for the website, in it we break down the pipeline for our starships from concept to in-game model. Below are links to that article and a couple previous SW:TOR concept art breakdowns that I wrote up. If you're interested in my process or game art in general, these might be worth checking out. Click the images below to head over to the different pages.
Studio Insider: Starship Creation
Click the image below: 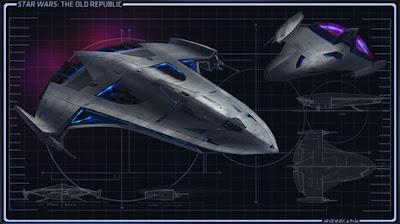 Developer Corner: Kaas City
Click the image below, scroll down past the fan art: 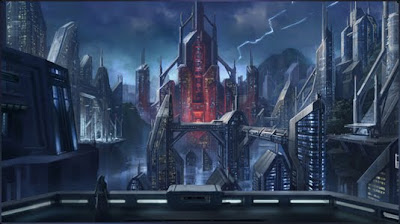 Developer Corner: Republic Capital Ship
Click the image below, scroll down past the fan art: 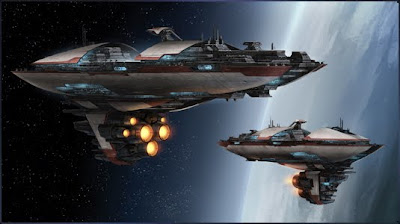 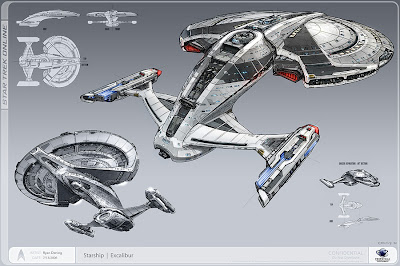 I worked on Star Trek Online at 'Perpetual' for a couple years before the game went to Cryptic. I've spotted some things that made it into the final release, like Rob Brown's beautiful space paintings and some derivatives of John Eave's designs. I definitely ran into Bobby Dedden's consoles while playing. I've seen a version of our old flagship, the 'Excalibur Class' in game trailers and I passed it's debris while flying around space.
This design found it's origination from a small sketch done by Massive Black in an earlier exploration phase. It was well liked by team leadership because it had a strong poise and it had turrets. I thought the idea of visible turrets in Star Trek would be an abomination, but it did signal the war time approach we were going for. The original sketch was very small and drawn from a view underneath the ship looking upwards. I elaborated on the thumbnail and explored a new style for Starfleet going forward. It was fun because I could explore some really extreme designs that I knew wouldn't stick but might foster some different ideas. I also changed the viewpoint, drawing these sketches from the dominant player camera. 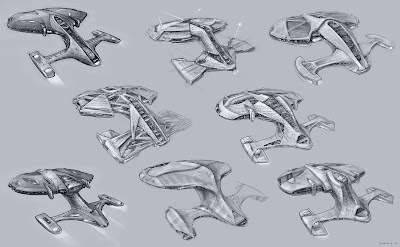 Below is a painting of the Excalibur for a poster used at conventions. I utilized an early mesh of the game model which was in progress. This allowed me to get a new angle on the ship quickly since I didn't have a lot of time to work on it. 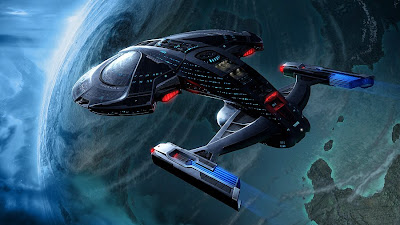 For kicks, I've included a couple of slides from a damage level test (painted over the finished in-game model). 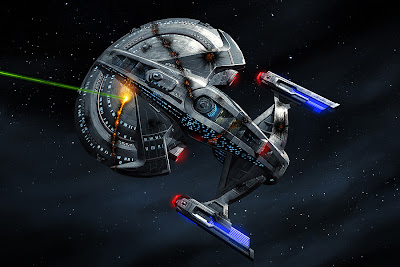 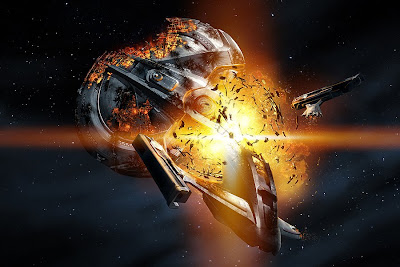 I had the fun opportunity to work on a kid's game for a short bit. It was in the 'blue sky' phase without a clear idea of what the content would be. One of the ideas on the table was set in a forest. 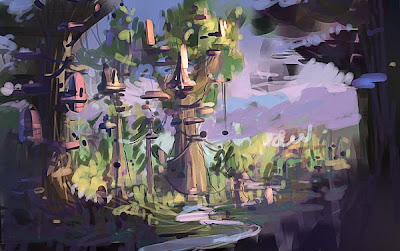 Treetop villages became the focus of this direction. To begin exploring stylization I tried making the leaf clumps into ball shapes and giving everything a whimsical design/feel. 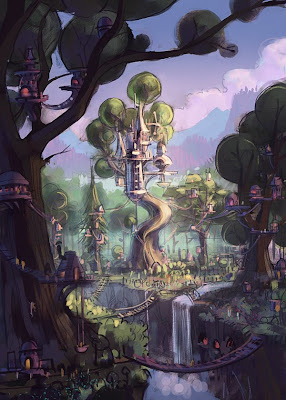 There was some concern that boys might not get into this, the palette and style was a bit faery-landish. I tried out some architectural ideas that might bridge that gap. Some were still fantasy oriented but with mechanical elements, one was a tree that grows into the shape of a house, another a castle in a tree. The ideas that stuck were extreme versions of existing theme-park tree houses - maybe whole maritime-like villages that were built into the trees. 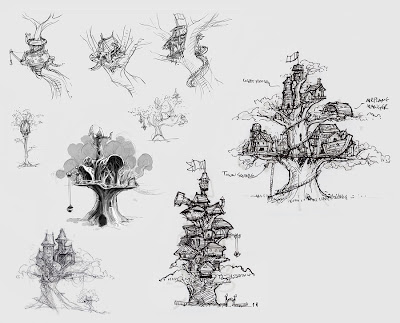 I added in some fun bits that could be different interactive zones; wind chimes, gears, etc. My favorite is the shark bowl with the spout and diving board. I also fleshed out the surrounding ground areas a bit. 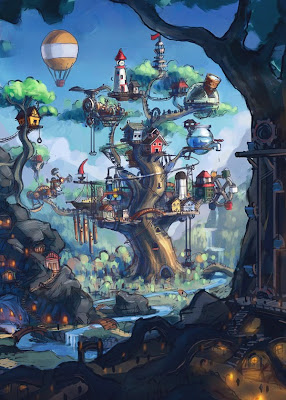 Timing only permitted me to begin thinking about what the interiors might look like - inside the tree trunk, inside one of the houses. 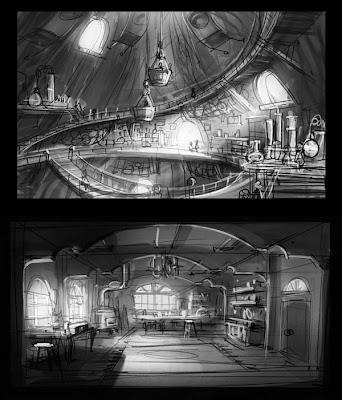 Island Villages
This sketch is from one of the other directions for the game that was being floated. I was inspired by the reveal shot of Neverland in Disney's Peter Pan. 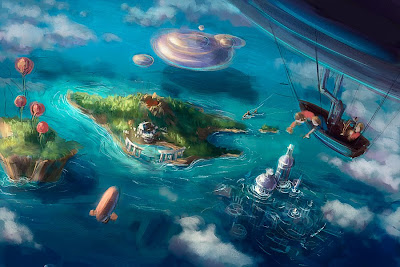 © 2008 Perpetual Entertainment
Posted by Ryan Dening at 3:23 PM No comments:

Some more rough concepts from 'Paladin'. You can see a few more at my portfolio site, including the final concept for the water raft sketch.
Cave: 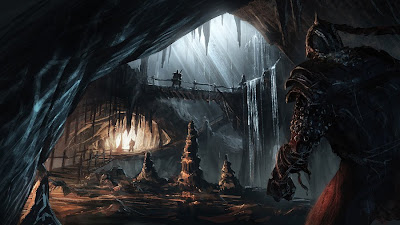 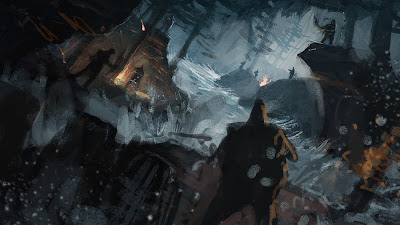 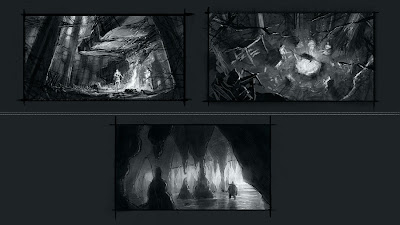 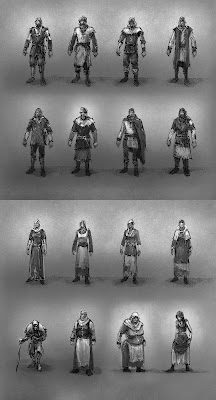